One of a series of articles relating to Great Crested Newt management written following the 1994 symposium which was organised by English Nature and Bob Bray (Bob Bray Associates). This article covers design implications for newts based upon experience rescuing newts in their terrestrial habitat.

An article discussing the value of ponds and how to raise their profile following the 1998 Pond Conservation Trusts’ conference at Denman College.

A scientific report commissioned by CCW to help fulfil the species action plan target in relation to the control of fish within Great Crested Newt ponds. It is the main reference source for the advice sheet published by the Amphibian & Reptile Conservation Trust in 2010.

An article primarily detailing water beetles discoveries emanating from Herefordshire Ponds and Newt Project between 2005 and 2006 with an emphasis on beetles collected from glacial ponds on the Letton Lakes and at Moccas Park. 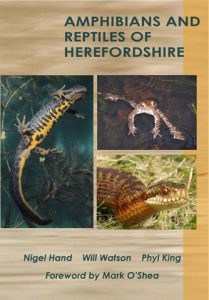 The 72 page booklet is the result of more than six years recording by the county’s reptile and amphibian experts culminating with the Herefordshire Ponds and Newts Project which over its three-year duration was run by HART. This beautifully illustrated publication has a foreword by Mark O’Shea. The project and some of the publication costs were part-financed by the European Union’s European Agricultural Guidance and Guarantee Fund and Defra through the Herefordshire Rivers LEADER+ Programme. The booklet is available from the Herefordshire Biological Record Centre and Natural History Book Service.

A seven-page article providing a species account of 32 scarce and/or unusual water beetles that have been found in Herefordshire. It includes a discussion which outlines importance of wetland sites for aquatic coleoptera in the county and the apparent loss of species recorded in late 19th and early 20th centuries.

An article on the re-discovery of fairy shrimp in Herefordshire from a pond on Hergest Ridge; the third confirmed record; previously recorded from the Shobdon area in 1935.

This article describes how a chance visit to an abandoned limestone quarry on the English/Welsh border led to re-discovery of the diminutive diver Bidessus minutissimus. It is the first record of this species of water beetle in England since 1908. B. minutissimus is a Biodiversity Action Plan Species and is listed as Red Data Book 3.