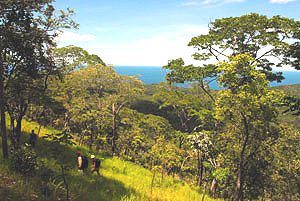 Following my visit to South Africa in 2007 I wanted to go further off the beaten track. The Mozambique coast is a favourite destination for South African tourists because of its beauty and lower prices, so I checked out the local accommodation websites. I was immediately drawn to the Manda Wilderness Reserve on the shore of Lake Malawi because it is run as an eco-friendly lodge and it has a strong local community involvement, and of course there is the location; it is one of the world’s most outstanding freshwater sites and it is stunning.

I choose to go during the rainy season because that is the breeding season for most amphibians and a particularly active time for reptiles and good for invertebrates, although there is risk that there can be interruptions from the weather. 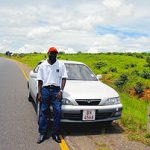 I arrived in Lilongwe on 7th February where I met up with Henry, Nkwichi Lodge’s taxi driver. I stayed at Mafumu Guest House, a former colonial house. It is charming, set within a sub-tropical garden; a good way to relax after a tiring flight in preparation for the journey to Mozambique.

The following day we left for Chipoka to take the ferry across the lake. Everyone with fast cars seems to drive at maximum speed. Henry offered to stop but we were going so fast I couldn’t see where. When I saw a river valley and asked to stop on the bridge where there is a chance to a composed photo. Henry told us about the giant Baobab en route; it was worth the wait. His wife kindly agreed to stand beside the tree for scale. It was the largest tree I ever seen, with a girth of over 10 metres and I’m told that it is perhaps a thousand years old and grew at a rate of one metre per hundred years.

We arrived early and I was taken to the Lake View Beach Lodge. It was out of season and looked much that way. I was the only customer.

I sat beside the lake beneath a thatched sunshade with a dark brooding sky behind. It was wonderfully atmospheric; grey clouds were gathering, and in the distance it was raining the other side of the vast lake. To the north, boats were lined up along the beach shore and there was a hive of fishing activity. A herd of cattle were on the lake shore and two young boys dived off an old fishing boat into the muddy water. Further along I spotted a group of teenagers hauling in a fishing boat that was half a kilometre out.

A keen-eyed local spotted the MV Ilala. She was over a kilometre out and I could just make her out but I couldn’t tell it was a ferry. I prepared to leave. The Ilala was built in Glasgow in 1949, shipped over and assembled on the lake. It has been in continuous use for 60 years, give or take the occasional breakdown.

Sailing the lake on board the Ilala is the best way to experience the lake. For a modest price you can purchase a mattress on the First Class passenger deck or hire one of the cabins; I did the latter. She is the lifeblood of the lake. She carries everything the lake communities require: fuel, food, cooking oil, wood. It’s a scramble to get to shore using the lifeboats. Sometimes the boats are overloaded. Heavy storm clouds developed and on the horizon I spotted a waterspout with a giant super cell cumulus cloud above. Luckily it was not heading in our direction!

Later I witnessed another of the lake’s natural phenomena; a cloud of lake flies drifting like smoke across the water. A dark cloud passed over the boat and a worried passenger asked,”What are they?”. A fellow passenger replied “Mosquitoes!”. She beat a hasty retreat. Of course they’re not, they’re actually non-biting midges (Chaoborus edulis), entirely harmless and are highly prized by locals who use them to make high protein cakes. 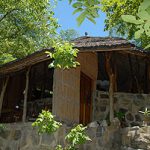 When you arrive at Nkwichi Lodge by outboard from Likoma Island you cannot see any of the Lodge until you reach the small harbour. The chalets are hidden amongst trees. All of the buildings are made from local readily available materials, with solid teak frames and thatched roofs and stone foundations. Each chalet has its own private beach on the shore.

The main guest beach is as romantic a spot as you could imagine and is known as Squeaking Sand Bay because the white sand squeaks as you walk across it. Metamorphic rock rises up from shore and leans over beyond the vertical with serpentine bands of sparkling mica, each rock a natural sculpture in its own right.

During my first night the heavens opened and the thunder closed in. Little streams of water started flowing into the chalet. I think that this is normal monsoon weather but the rains have washed away two wooden bridges, and half the sand on Squeaking Sand Bay has been washed away. Peter and Diana Simkin, who set up the Lodge with their son Patrick (Lodge Manager), say 4½ inches fell in 24 hours and it is the worst rain they have known in 10 years.

Nkwichi Lodge and the Manda Wilderness Reserve are set within pristine habitat on the eastern shore of Lake Niassa (Nejnga name for Lake Malawi) are arguably the most untouched and naturally wild part of Africa. Indeed much of the shore remains much as it did in Dr. Livingstone’s day.

Natural forest, known as Brachystegia Parkland; which is an open mosaic of trees and savannah, reaches down to the rocky lake shore. Every couple of miles or so this gives way to bays with golden sandy beaches. There are wooded mountains, rivers, streams and long stretches of virgin marshy swamps and floodplain. Small villages of traditionally made mud huts with thatched roofs nestle in bays along the shores. It is pristine, idyllic and underdeveloped. The Simkins are passionate that they want to keep it that way.

The reserve covers an area of 120,000 hectares; about half the area of my resident county of Herefordshire. The reserve supports lions, leopards, zebra and, most significantly, a pack of rare African wild dogs. These free-roaming animals have access across vast areas wilderness which adjoin the reserve and perhaps for this reason are not readily encountered.

The Manda Wilderness reserve is home to just 20,000 Nyanja people compared with 180,000 people living in Herefordshire! It is run by a community trust which has helped build five schools and supports a range of farming projects.

My interest, work and my passion back home is freshwater ecology and I am here to study the invertebrates, in particular the water beetles. As far as I know, the wetland areas in and around the Mozambique lake shore have never been studied in any detail. Here was a great opportunity to find rare species, carve a bit of a name for myself and help the Lodge at the same time by documenting new discoveries. I packed my pond net in my rucksack, minus the pole! A new pole from the local teak was made at the Lodge by the local carpenter.

The village of Mandambuzi is about 12 kilometres south of the Lodge. The nearest marsh is to the northwest of the village and covers an area of 5,000 metres square. It has a broad draw-down zone which has been colonized by emergent vegetation. I could not have been here at a better time of year because everything was in flower and the water was teeming with life. There were deeper pools within the marsh, which have been dug by the local villagers to wash cassava. These now support African white-lilies Nymphaea flavovirens and a relative of our yellow fringed water-lily Nymphoides sp, both of which were in full flower.

An amaryllis with white and red stripes grows beside the margin; I dubbed this raspberry ripple! By day small reed frogs camouflaged themselves on the green leaves. By night there was an amphibian chorus which sounded like popcorn bursting in a frying pan. There were other frog calls suggesting at least five species are present. Dip netting the shallows reveals a range of mainly small water beetles representing at least 37 species, including Haliplidae, Bidessini, Amphiops, globular Hydrophilids, Noterids, Limnichids, Bagous ssp., Laccophilus spp., Hydrovatus spp and the medium sized diving beetle Hydaticus dorsiger. A large crawling bug with piercing mouthparts was also noted, possibly Fiebers giant water bug Limnogeton fieberi. 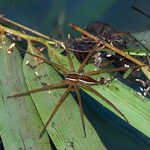 The following day my guide Peter Mandela took me to another section of marsh about five kilometres distance from the previous one. Here I observed fen raft spiders Dolomedes sp. In particular there was a stunning one with what could only be described as bar-code legs. Four large diving beetles belonging to the genus Cybister were found together in an area of trampled reeds.